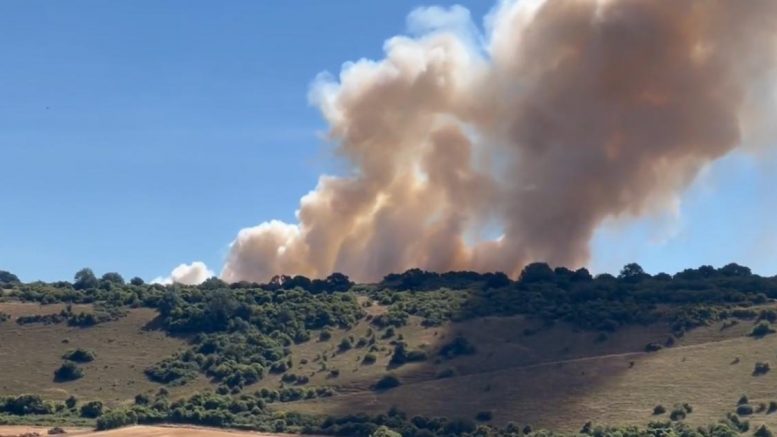 Dorset and Wiltshire Fire and Rescue Service says it was called at 11.42am to reports of a field of standing crops on fire near Fovant badges.

Multiple crews were called to the scene, including appliances from Salisbury and Wilton.

A spokesperon for Dorset and W ltshire Fire and Rescue Service said: “We were called at 11.42am for a field of standing crops on fire near Fovant badges.

“Crews from Wilton, Salisbury (x2), Shaftesbury and Fordingbridge were mobilised, along with the water carrier from Wilton, and small 4×4 appliances from Verwood, Blandford and Shaftesbury.”

The fire affected a field of around 14 hectares and firefighters extinguished it using beaters and ose reel jets.

Farm machinery was also used to create a fire break.

The incident was dealt with by around 1.25pm and the fire service says most of the appliances have now left the scene but a fire engine and water carrier are still at the scene.

This is the latest in a number of fires in the open that crews have had to deal with in several days.

Yesterday afternoon, multiple fire crews were sent to the incident near Duck Lane in Laverstock, which was reported to Dorset and Wiltshire Fire and Rescue Service at 6.30pm.

The blaze quickly spread to the edge of the field, near houses on Greenwood Avenue, before crews managed to extinguish it.

RESIDENTS in Salisbury will be able to remember and pay their respects to the Queen. Salisbury Journal | News …

The fire has now been put out Salisbury Journal | News …

A FIRE at a commerical premises in Tidworth is “now under control” but crews will be on scene for a number of hours to monitor for hotspots. Salisbury Journal | News …